What is a Hybrid Closed Loop System?

Hybrid Closed Loop Systems: What They Are, and How They Work

Today, we’re in the midst of a revolution in diabetes management:  Systems that act kind of like “Insulin Helper”.  Better known as “Hybrid Closed Loop Systems,” or HCLs, they take an insulin program and mix in some technological magic to produce better results.  Understanding how these systems operate can help you decide whether an HCL is right for you.

What is a Hybrid Closed Loop System?

A hybrid closed loop system is made up of three parts: 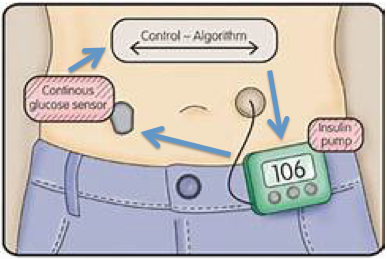 When we talk about a pump’s insulin delivery, we’re mainly referring to the pump’s basal delivery.  Because we’re still dealing with insulin that is relatively slow to act, bolusing for food is still the user’s responsibility.  But the algorithm can raise and lower the pump’s basal delivery in an attempt to keep glucose levels within a desirable range.

Why is this useful?  For many reasons.

First, most people do not have their basal rates set correctly in their pump.  Fine-tuning basal settings is a challenging task, requiring the tester to fast at various phases of the day and night, and adjust the basal delivery until glucose levels hold stable during the fasting periods.  Even for those who manage to complete the full battery of tests and hone their basal settings to meet their body’s exact needs, those needs can change on a dime.

An algorithm that automatically adjusts basal delivery works best when there is little “foreign influence” on the glucose level:  no food being eaten, no heavy exercise taking place, and very little bolus insulin present.  In other words, during sleep times and between meals.

These also happen to be times when most people are not actively monitoring their glucose levels or making adjustments to keep things on-track.  We’re essentially at the mercy of our basal insulin to take care of things for us during these times.  So it is comforting to have a system that helps the basal insulin do the job as well as possible.  Some systems are also evolving to the point of administering correction boluses to “fix” stubborn high readings rather than just ramping up the basal insulin.  This can shorten the time required to bring the glucose back down to a desirable range.

Another reason it is helpful to have the pump make automatic adjustments to basal insulin levels is because we’re not always dead-on accurate with our bolus doses.  When mealtime insulin doses come up a bit short are too aggressive, the blood sugar usually winds up way out of range.  But if the system adjusts the basal when glucose levels begin to veer into unwanted territory, the impact of the erroneous bolus can be minimized.  Or, as I often like to put it, the algorithm helps to compensate for our own inequities.

What Can a Hybrid Closed Loop (HCL) Accomplish?

There are two main advantages to using an HCL.  One is emotional, the other, numerical.

Emotionally, HCLs can alleviate a significant amount of mental burden on the user and their caregivers.  Because the system is making frequent micro-adjustments on its own, there is less need for the user to constantly micro-manage.  There is less worry about low blood sugar (particularly overnight), and less stress caused by dramatic blood sugar swings.  All that mental energy that used to go into glucose management can now be used for more important things, like fantasy sports statistics and binge-watching shows on Netflix.

The numeric part is a little less universal.  HCL users are likely to experience a lower average glucose, less hypoglycemia, and more time spent in a desirable glucose range.  LIKELY, but not absolutely.  The degree of improvement depends on the system.  there are instances where people have exceptional glucose control before using an HCL and find that their average actually goes up a bit.  But from the standpoint of glucose stability, things almost always improve when an HCL is used.  Why?  Because the insulin-adjustment algorithm compensates for our own “inequities”.  If the basal rate is too high or too low, the algorithm makes an adjustment.  If the bolus is a little too much or too little, the algorithm makes and adjustment.

What Can’t a Hybrid Closed Loop (HCL) Do?

HCLs make relatively subtle insulin adjustments in a predominantly reactive manner, using insulin that takes hours to either clear or take effect.  Think of your diabetes as a huge ship with a small rudder moving at a very fast speed.  Even if you turn the rudder as far as it can go, it is going to take a while for the ship to change course.  The pump’s basal adjustment just isn’t powerful or responsive enough to prevent high and low glucose levels when confronted with anything that causes blood sugars to rise or fall quickly, such as:

In other words, timely/accurate bolusing on the part of the user is still necessary, as is adjustment for various lifestyle events.

Are There Limitations to Using a Hybrid Closed Loop System?

Yes,there are several limitations to any HCL system which hinder its ability to keep glucose levels within range continuously: