OmniPod Gears Up to (Almost) Close the Loop 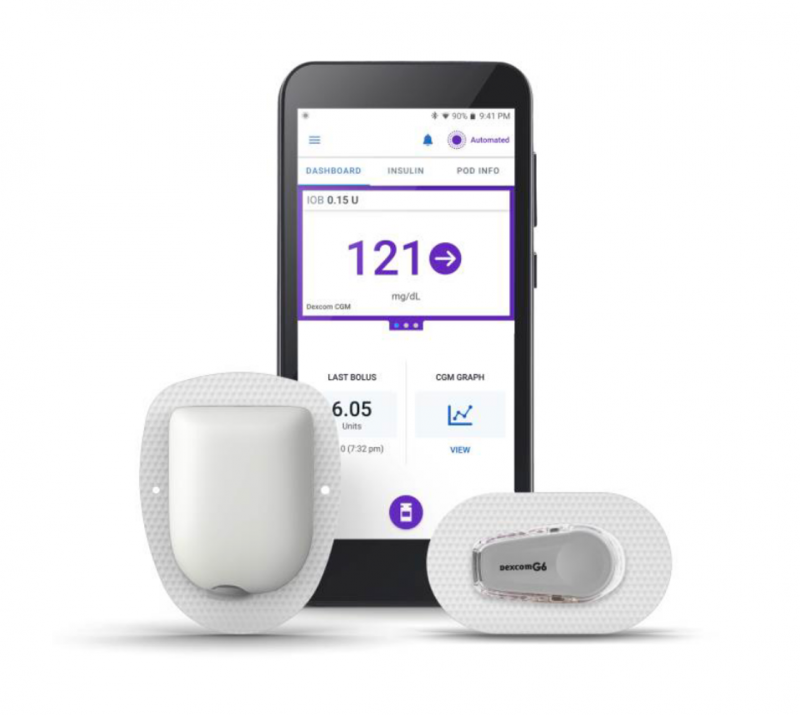 After years (and years) of waiting, Insulet is finally on the cusp of launching OmniPod 5 – a system that combines the OmniPod disposable patch pump with a Dexcom G6 CGM and an algorithm that automatically raises and lowers basal insulin delivery.  Compared to other commercially-available hybrid closed loop (HCL) systems such as Tandem X2 with Control IQ and Medtronic 770, OmniPod 5 has some features to get excited about.

But before we get into that, here’s a bit of background.

Product-wise, OmniPod5 uses new Bluetooth-enabled pods that have the HCL algorithm built in.  They are the same size and shape as traditional pods, holding up to 200 units of insulin.  The OmniPod 5 mobile app is required for setting up each pod, linking the pod with the current glucose sensor, and bolusing.  Once a pod is initialized, the app is not required for automated basal adjustments to take place.  Initially, the app will only run on a compatible Android phone.  For those who don’t have a compatible phone, Insulet will provide a basic phone that can only run the OmniPod 5 app but cannot be used for anything else.  This is similar but not exactly the same as the current OmniPod Dash programmer.  Insulet reports that loved ones will have access to the user’s data with an app that is similar to the OmniPod View app.

The algorithm built into the pods makes automated adjustments to basal delivery every five minutes based on current and projected glucose values derives from the CGM.  This is called a “model predictive algorithm”.  The magnitude of the adjustment is based on historical insulin usage and the perceived insulin sensitivity of the user.  The target glucose value used by the algorithm is customizable to be anywhere from 110-150, in 10 mg/dl increments.  Different targets can be set for different times of day.  One “override” option is available: the HypoProtect feature temporarily sets the target to 150 and minimizes basal insulin delivery for situations such as exercise.

To start using automated insulin delivery, the user only needs to enter their Dexcom G6 transmitter’s serial number into the app.  There are no limits on the amount of insulin one uses, no calibrations required, and no waiting days for the Automated Mode feature to kick in.  Initially, the algorithm applies the user’s usual basal settings as a foundation.  After the first two to three pods are deactivated and new ones are activated, the algorithm makes more robust self-adjustments and adapts the foundational basal program based on the user’s needs over the past several days.  After about nine days of use, the new foundational basal program is set.

As with other HCL systems, boluses remain the responsibility of the user.  The OmniPod 5 app allows the user to utilize their preferred insulin-to-carb ratios, correction factors, targets, and duration of insulin action for bolus calculations.  Taking things one step further, the app automatically increases or decreases bolus amounts based on CGM trends.  If the glucose is rising, the bolus may be increased by as much as 30%.  If falling, it may be decreased by as much as 100%.

The major “pivotal” research study designed to assess the safety and effectiveness of OmniPod 5 showed significant benefits for both children and adults with type-1 diabetes.  Time in-range (the percentage of the day spent between 70 and 180 mg/dl) improved from a baseline of 51% to 71% in children when transitioning from standard diabetes management to OmniPod 5, particularly when using a glucose target of 110 mg/dl.  In adults, time in-range improved from 66% at baseline to 75% when a target of 130 mg/dl was used.

Participants in the study used OmniPod 5 in Automated Mode more than 97% of the time, indicating that it was relatively easy to maintain and use the system.  There were no major problems (adverse events) with the system, nor were there episodes of severe hypoglycemia or DKA during the course of the study, which ran for 14 days with 36 users ages 6-70.

What It All Means

Safe to say, Insulet has put together an HCL system that is safe and has the potential to improve glycemic control for most users with little to no additional work on the user’s part.  That positive balance of benefit vs. cost is quite important.  What is most exciting is that we will finally have a commercially-available HCL system that does not require use of a tubed pump.  Sure, for those with decent tech skills and a penchant for sticking their nose up at the government, we already have the DIY Loop and APS systems that can hack into the old radio-enabled “eros” pods.  But OmniPod 5 is a system that is truly ready for the masses.  It appears to be easy to learn and use and incorporates the most popular sensor in the type-1 market.

But it’s not all sunshine and buttercups.  There are a number of potential downsides to OmniPod 5 that should be taken into account when choosing an HCL system:

Who, When and Where?

Insulet submitted their application to the US Food & Drug Administration back in December, 2020.  It usually takes the FDA 4-6 months to render a decision, so hopefully approval will be received towards the middle of 2021.  The submission requested approval for ages 6 and up, but Insulet has already begun a follow-up study to evaluate the product in children as young as 2 years old.

Initially, Insulet plans a “limited” rollout – which means they will restrict access to a manageable number of patients who are treated by clinicians with adequate resources to train, educate and manage patients on the new system.  A full rollout will likely take place a few months later.

Since there is nothing quite like personal experience, we at Integrated Diabetes Services plan to give OmniPod 5 a try as soon as we can get our grubby little hands on it.  Stay tuned for more updates.