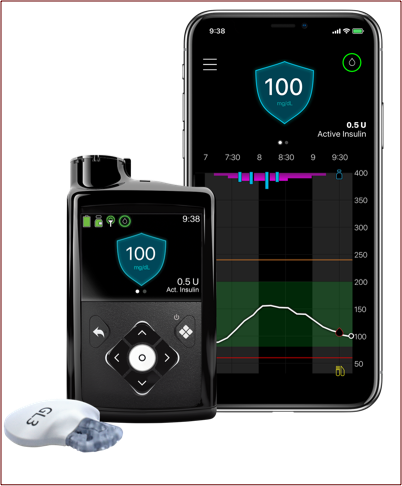 The study focused on the potential benefits of the MiniMed’s Advanced Hybrid Closed Loop (AHCL) technology which provides automated basal and correction boluses when the automated system is activated. Highlights of the Advanced Hybrid Closed-Loop system include adjustable targets (100, 110, 120 mg/dL), a 5 minute automatic correction bolus, and an automated basal insulin delivery every 5 minutes.

The study analyzed the amount of time patients spent in range (TIR) as well as the patient’s glucose management indicator (GMI – similar to A1c). The resulting data was used to compare TIR and GMI in closed loop mode to TIR and GMI when the system was being used normally. Some patients in the study provided data that showed their TIR and GMI both before and after the AHCL system was activated. The study found that for this subset of users:

This shows promising initial results compared to manual mode. Interestingly, overall insulin delivery was also lowered when users activated the AHCL. This points to the potential benefits of the system’s 5-minute automatic correction bolus and insulin delivery to aid in blood glucose consistency.

It is worth noting that this study doesn’t offer input from users about the ease of use of the system and how we might find it working in our daily lives. User-initiated boluses did decrease (6.0 boluses per day in normal mode vs 4.8 boluses per day in AHCL mode), but there was still certainly user intervention at mealtime. The study also notes that user-initiated meal announcements provide optimal results.

This study excluded patients that are prone to hypoglycemia or diabetic ketoacidosis (DNA), so there are certainly real-life situations and events that weren’t fully considered in this analysis. We also don’t know the number of patients that dropped out of the study, the reasons patients dropped out of the study, or why patients might not have opted in initially, so we should definitely look for reviews from consumers about the system once they become available.

The MiniMed 780G is an insulin pump that is not available yet in the United States, but it is available in 30 countries across Europe and is currently being reviewed by the Food and Drug Administration.