Back to May 2017 Newsletter

It’s All About SPEED: My Afrezza Experience 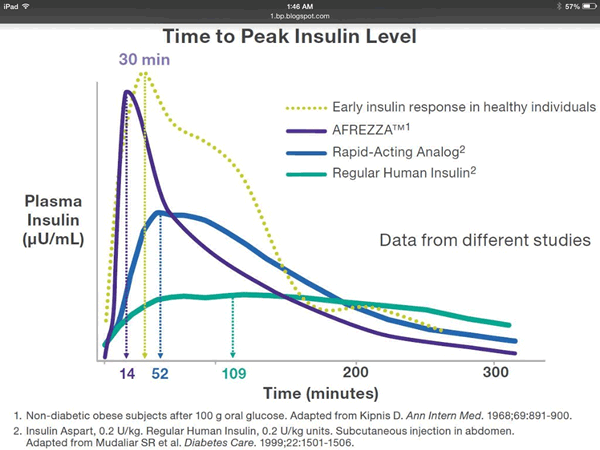 Anyone who has heard me speak knows that I like to put the term “rapid acting insulin” in quotes (like I just did) because, as we all know, rapid acting insulin is a misnomer.  Subcutaneous injections of aspart (Novolog/NovoRapid), lispro (Humalog) or glulisine (Apidra) produce an action curve that lags way, way behind that of pancreatically-produced insulin.  “Rapid” insulin starts working approximately 15 minutes after injection/infusion, peaks in 60-90 minutes, and lasts a full 3-5 hours.

Unfortunately, most forms of carbohydrate raise blood sugar long before “rapid” insulin peaks, resulting in post-meal blood sugar spikes followed by rapid drops – not exactly an ideal situation for those who care about feeling and performing well on a daily basis.

Another major limitation to “rapid” insulin is the time it takes to bring above-target blood sugars down to normal.  Nobody likes to spend long periods of time with high blood sugar; it turns us into zombies with a major urge to urinate, and drives the A1c up.  Many people don’t have the patience to wait 3-5 hours for their high readings to come down, and administer even more insulin before the original correction dose has finished working.  “Angry bolusing,” as this is often called, tends to lead to hypoglycemia.

Afrezza, developed and marketed by MannKind Corporation, features recombinant human insulin in dry powder form (called Technosphere) and a whistle-like device for inhaling it.  Once in the lungs, the insulin absorbs quickly into the bloodstream.  By avoiding the need to absorb through the fat layer below the skin, Afrezza starts working almost immediately, peaks in about 15 minutes, and in most cases, clears in about 2 hours.   Now that’s rapid!

For years, I was hesitant to try Afrezza.  There was speculation that the lungs could be affected by repeated inhalation of insulin, but this has been mostly disproven.  The dosing increments are wider than I’m used to (4, 8, 12, etc…), but I’ve heard rumors that these doses are somewhat forgiving and flexible.  And there is ongoing talk about MannKind’s ability to survive financially.

Who wants to get comfortable with a product that may not be available for the long term?  But the company seems to find innovative ways to continue functioning, and even expand.   So two weeks ago, I started my “PB & A” experiment (pump basal & Afrezza) for all of my bolus dosing. 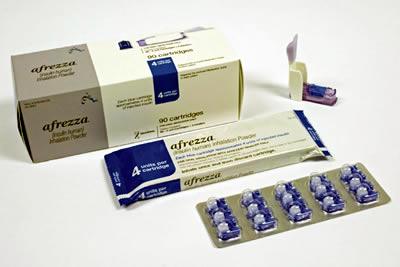 Load a cartridge (the size of a little green house from Monopoly) into the whistle-like inhaler, put the mouthpiece in your mouth and inhale slowly.  The insulin cartridges come labeled as 4, 8 and 12 units.  I say labeled, because they don’t actually work like 4, 8 and 12 units.

From my experience (and that of some of my colleagues), they have about half the potency of injected insulin, so they can be treated as 2, 4 and 6 units.  If you need more than 6 units, you would simply load another cartridge and do a second inhalation.

It took several tries to get the inhalation process down.  The first several times, I coughed right after inhaling and saw a cloud of “insulin smoke” puff out of my mouth, so I had no idea how much insulin I actually inhaled.   But now I have the procedure down pretty good.

Sipping some water beforehand and exhaling fully before inhaling really helps.  It also took several days to determine that a unit of Afrezza works like half a unit of injected insulin, so my blood sugars were pretty high at the beginning.  I even contemplated quitting and going back to bolusing with my pump.  But I persevered, adjusted my doses, and things look much better now.

Here are what I see as some of the PROS and CONS associated with using Afrezza:

The stuff is FAST.   Whenever my blood sugar is elevated, I can bring it town to normal within about 90 minutes.  This is particularly helpful if you’re a bit dehydrated (which is often the case when the blood sugar is elevated), because insulin does not absorb well below the skin in a state of dehydration.   Absorption through the lungs is unaffected by one’s state of hydration.   And the magnitude of the dose does not appear to affect Afrezza’s action curve, whereas larger doses of injected/infused can take longer to work than smaller doses.

I like the fact that I can give my mealtime insulin after eating instead of before.  For many people with diabetes, meal schedules vary from day to day, so pre-dosing is not always practical – particularly when food is eaten spontaneously.  There is no need to “guesstimate” your carbs before eating since you can dose based on your actual carb intake following the meal.  And because of how quickly Afrezza works, the post-meal glucose rise is minimal… perfectly flat in many instances.

The short duration of Afrezza’s action is another perk.  Because Afrezza clears in 90-120 minutes, blood sugars are much less likely to drop prior to the next meal.   This makes it safer to exercise before the next meal since there is little to no bolus insulin still working.   To paraphrase Chrysler’s Lee Iacocca, Afrezza “does the job and gets out of the way.”   That’s nice.

Despite the many benefits offered by Afrezza’s rapid action, speed can be a double-edged sword.   Specifically, Afrezza may actually wear off TOO early when used to cover meals.  Although most forms of carbohydrate start hitting the bloodstream in just a few minutes, they also tend to take several hours to digest fully.  If the insulin wears off within two hours and the food is still raising the blood sugar, the result is a delayed blood sugar rise in the two-to-four-hour timeframe.  This is something I’ve struggled with since starting Afrezza.  Delaying the inhalation until 10-15 minutes post-meal has helped, but not all the time.

There is some research showing that dosing 15-30 minutes postmeal produces relatively flat post-meal profiles, as does a “split dose” of Afrezza (half given with the meal, half given 30 minutes later).   Personally, if my delayed glucose rises persist, I may try splitting my dose with 75% given 15 minutes post-meal, and 25% given 2 hours post-meal.   Even if this works, having to calculate the split dose and remember to give the delayed dose raises the PIA (pain-in-the-ass) factor.

Figuring out the right doses is also a bit of a challenge with Afrezza.  For me, every unit of Afrezza works like a little less than half a unit of traditional insulin, but that can vary from person to person.   One study showed that the conversion from injected insulin to Afrezza requires an average dose increase of about 80%.  So it will take some time to “titrate” your Afrezza doses; expect some higher-than-usual readings in the early going.

The dosing increments can also be an issue for some people.   We can dose Afrezza in roughly 2-unit increments (4=2, 8=4, etc…).   This works fine if your blood sugar or carb intake calls for a convenient 2, 4 or 6 unit dose.  But this isn’t always the case.  Being averse to hypoglycemia, I tend to err on the side of under-dosing, and this produces some higher-than-desired blood sugar results.   I suspect that Afrezza was originally designed for those with type-2 diabetes, where highly-specific dosing isn’t terribly important.  For those with type-1, especially those who are very insulin-sensitive, the ability to dose in increments smaller than two units is often necessary.

Finally, there is the general PIA associated with the administration of Afrezza.  For those who currently take injections, Afrezza may actually be easier and more convenient.  But for those who use an insulin pump, where bolusing is a matter of merely pressing a few buttons, using an insulin inhaler can take a lot more work.

The Afrezza cartridges come in blister packages that must be stored in a refrigerator and then carried around at room temperature before use.  The inhaler also has to be carried around and is supposed to be replaced every two weeks.

Taking doses in excess of 6 units (12 units of Afrezza) requires multiple cartridges and inhalations.   And the actual inhaling process can sometimes cause coughing and a foul taste.

Given how long we’ve been waiting for faster insulin, it is nice to know that we now have a good option.   Afrezza is an excellent tool for fixing highs quickly and keeping blood sugars from spiking after meals.  And it works consistently regardless of the dose size or one’s state of hydration.

For those using insulin pumps, it can serve as a nice adjunct to the pump’s basal delivery for correcting highs and perhaps as a bolus insulin for rapidly-digesting meals (or times when pre-bolusing is not feasible).  For those on injection therapy, it can certainly be used for all bolus dosing, but care must be taken to prevent post-meal lows and delayed highs.

Many of Afrezza’s drawbacks can be minimized by working with a healthcare team that understands the nuances of the product.   A good diabetes educator can be invaluable in helping Afrezza users learn proper inhalation technique, titrate doses quickly & safely, and optimize dosage timing.  And perhaps, someday, MannKind will develop cartridges that allow dosing in finer as well as larger increments.