Loop vs. 670G: A Case Study in Government Oversight vs. Grassroots Innovation

I’ve never been a fan of bureaucracy… especially when it comes to developing new and innovative treatments for health conditions.  Bureaucracy brings inherent costs and delays for the sake of public safety.  The trouble is, diseases are by their very nature UNSAFE.  Every year, every day, every second we live with an uncontrolled disease, our health suffers.  By leaning heavily on the side of safety, the United States Food and Drug Administration (FDA) has essentially decided, on our behalf, that risks posed by new medical treatments outweigh their benefits until they say otherwise.

By no means am I suggesting that we eliminate all safeguards and simply allow industry to run amok.  We all know what can happen when profits take precedence over public welfare.  But at some point, consumers have to be given the opportunity to weigh the risks and benefits of a given product on their own, and make decisions that are in their personal best interest.  After all, that is the nature of a free-market economy.  If you think the advantages outweigh the costs, go for it.  If you think the risk are too high compared to the potential advantages, then don’t.

One of the best examples I’ve come across in this “regulation vs. right to choose” debate is the We Are Not Waiting movement within the diabetes space.  The product that most typifies this movement is the “Loop” app that essentially creates a hybrid closed loop system by combining a hodgepodge of FDA-approved products:  The Dexcom G5 CGM (or G4/Sof-Sensor-Enlite) and an older-model Medtronic Paradigm x22 or x23 insulin pump, along with a RileyLink circuit board and the build-it-yourself Loop app.  The Loop app is free, although one must pay a modest fee for the Riley Link and to become an Apple developer in order to create it.  All of the instructions are published online and support is provided through the Looped Facebook page, so this is truly a DIY (do-it-yourself), non-FDA-regulated or approved program.

At the opposite end of the spectrum is the The Medtronic 670G hybrid closed loop system, which features the Medtronic 670G pump, Guardian sensor, and insulin-adjustment algorithm built into the pump itself.  670G seems to have been designed with the FDA in mind… everything about it screams “safety first,” from the conservative glucose targets to the SafeMode temporary default feature.  Medtronic received FDA clearance to market 670G late in 2016.  The system requires a prescription and is covered by many health insurance plans.

Necessity truly is the mother of invention.  And nobody invents quite like tech gurus in the Silicon Valley.  From a PERFORMANCE perspective, Loop offers many advantages over 670G.  The target glucose levels are customizable by the user – including a temporary target increase (for exercise) and decrease (for pending meals, to minimize the magnitude of the post-meal peak).  Loop allows the user to modify suggested bolus doses for both meals and corrections.  And speaking of corrections, Loop applies the user’s customary sensitivity (correction factor) settings in making dosage recommendations.  And then there’s my fav feature:  With Loop, you can program your pump boluses with your phone!  No need to get out your pump (or a separate remote control) for delivering boluses.

Most notable, in my opinion, is the fact that Loop makes proactive adjustments instead of waiting for the blood sugar to get too high or low.  It bases this on active insulin (including bolus and basal insulin) as well as active CARBS – something truly unique to this system.  When entering carbs for bolus calculations, Loop asks approximately how long it will take your food to absorb (2, 3 and 4 hours are common entries).  This is essential for determining whether the insulin-on-board will be offset by the carbs-on-board.  All of this is displayed beautifully on the status screen, along with a glucose projection covering the next 3+ hours (see example below). 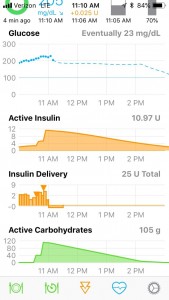 When determining basal delivery, Loop utilizes the user’s prior basal settings as a starting point.  This is a key feature, because it can prevent overnight and between-meal rises/falls rather than waiting to fix them once they take place.  670G, on the other hand, ignores the user’s previous basal settings and uses a rough average as a starting point around-the-clock.  Someone whose basal needs vary considerably by time of day will find the Loop approach particularly helpful for stabilizing glucose levels.  The basal adjustments made by Loop can be much more robust than those made by 670G.   The magnitude of the adjustments is limited only by the user’s preferences in setup, and there is no limit to the duration of the adjustments.  670G has program-set maximum/minimum basal limits, and time limits for which max/minimum levels can be delivered.  In the course of everyday life, these can get in the way of optimal glucose regulation and produce extra nuisance alarms.

Speaking of alarms, Loop does a nice job of keeping alarms and alerts to a minimum.  It more-or-less runs in the background, and only alerts the user if it has lost the sensor signal or has not been functioning for a period of time.  One of the chief complaints regarding 670G involves the frequency of alarms, alerts and notifications.

That Loop can use the Dexcom G5 sensor speaks for itself.  Compared to Medtronic’s Guardian sensor, G5 produces better accuracy and longevity, requires fewer steps to insert and tape in place, does not require weekly transmitter charging, allows for cellphone display of real-time data and sharing with loved ones, and requires far fewer fingerstick calibrations (1-2 daily vs 3-6 daily).

Finally, being a non-regulated product, Loop has the ability to adapt rapidly.  As newer and better products come to market, Loop designers can integrate them into the system as soon as they can write the necessary program code.  No need to go through months (or years) of product testing and then more months (or years) waiting for the FDA to approve the updates.  For example, Loop already has an insulin model for Fiasp insulin.  Developers are hopefully working on incorporating the Dexcom G6 transmitter signal, and plans appear to be in the works for controlling pumps other than just the old-model Medtronic Paradigm.

Hail to the Tried and True

There are definitely advantages to doing things the traditional way, particularly in the areas of product safety and quality.  For all its strengths, Loop was never run through vigorous usability testing.  It doesn’t come with a nice set of instructions.  Or professional training.  Or 24/7 phone support.  And the old Paradigm pump used by Loop users doesn’t come with any kind of warranty.  If something goes wrong with that pump, you’re basically S.O.P. until you can track down a suitable replacement – and that’s getting harder all the time as the availability of x22/x23 pumps shrivels up.

670G comes fully functional right out of the box (actually, 11 different boxes).  Although most users require three or more training sessions and must stay in “manual mode” for about a week before getting started using full “auto-mode,” that’s nothing compared to the long, onerous, complex, and sometimes very frustrating process of setting up Loop.  If you don’t have a strong background in computers (Mac systems in particular), you’re going to need help.  And even after everything is set up, there are dozens of picky little problems that can keep Loop from functioning (thank God for Facebook help!).  The FDA would never approve something with so many potential pitfalls.  Medtronic, by contrast, provides full training and support for all users, and provides follow-up guidance as needed.

Another advantage of 670G:  Medtronic has consolidated everything into just two parts — the pump and the sensor.  The pump contains the insulin adjustment algorithm, and communication between the pump and sensor is virtually seamless.  In addition to wearing a pump and sensor, Loop users must have their app-containing phone handy at all times and carry the RileyLink device everywhere to enable communication between components.  And by the way, the RileyLink requires daily charging.

Finally, downloading and generating data reports from 670G is a fairly simple, streamlined and efficient process.   Medtronic’s Carelink web-based software works on both Mac and PC systems, and smoothly integrates the pump and sensor data into fairly insightful reports.  Loop can generate reports (several options are available, including Nightscout), but once again, you’ll need decent tech skills (or someone with such skills at your side) to set this up.

Just as government oversight and free-market innovation carry their share of benefits and drawbacks, so do the products that emerge from their platforms.  Clearly, products like Loop and 670G play an important role and have their devotees.  It’s just a shame that we can’t marry the best of both worlds:  A system that is highly effective at achieving desirable blood sugar control with minimal inconvenience,  that is also simple (accessible by the most people) and very safe and supported.  For now, we’ll just have to choose to make a choice.

“If you choose not to decide, you still have made a choice.”