Faster than the fastest meter.

Able to leap piles of test strips with a single scan.

Seriously, this is exciting.  Abbott’s Frestyle Libre has finally been approved for sale in the United States.  Why the excitement?  Because it almost eliminates the need for fingerstick blood glucose measurements.  It has features of a CGM (continuous glucose monitor) and a blood glucose meter combined in one device.  And it is simple to use, reasonably accurate, virtually painless, and relatively inexpensive ($60 for the durable receiver/scanner, $40 per sensor; insurance coverage pending). 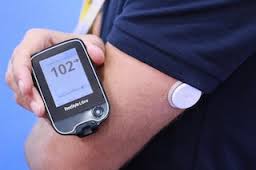 Super!  How does it work?

An applicator device is placed on the back of the arm.  With one push, a tiny glucose-sensitive filament is inserted just below the skin, with the waterproof transmitter (about the size of two stacked quarters) attached and adhered to the skin.  After a 12-hour warmup period, a signal is sent every minute to a handheld receiver about the size of a small cell phone, and the current glucose level along with a trend arrow and graph of the most recent eight hours of data is displayed.  The sensor/transmitter is replaced every 10 days.  And because of its accuracy, NO fingerstick calibrations are required.

A very similar device has been available in Europe and other parts of the world since 2014.  The hardware is basically the same, but there are a few subtle differences between the US version and the European version.  The European sensors last 14 days each as opposed to 10 with the US version (the sensors cannot be “re-used”), and the warmup period only lasts 1 hour (as opposed to 12).  However, the accuracy of the US version is slightly better (average error of 9.7%, compared to 11%) – likely due to the longer warmup and shorter length of wear.  Also nice to know that the sensors are not affected by acetaminophen.

Everyone at our practice had a chance to try out the European version of Freestyle Libre soon after it launched (it helps to have friendly clients all over the world!).  We were impressed with it from the getgo.  Compared to current CGM systems, it is very easy to insert and use right out of the box.  No training required.  Despite the lack of fingerstick calibrations, the data generally matched up well to our fingerstick meter readings (you didn’t think we would trust it THAT much, did you?). The comfort was also quite good, although the adhesive left a little to be desired. 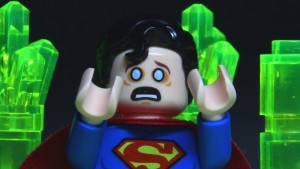 My pappy once told me that if something sounds too good to be true, it probably is.  While Freestyle Libre combines many of the features of CGM and fingerstick meters, it comes up short in a number of key areas.  Perhaps the most glaring weakness is the lack of alarms/alerts for pending high and low glucose levels.  Because the user has to physically “scan” the receiver just over the transmitter in order to generate any data, the device does not track things constantly the way a Dexcom or Medtronic sensor does.  The only way to know if you’re low or heading low is to do a scan.  With so many people lacking early warning symptoms for low blood glucose, traditional CGMs are relied upon heavily for avoidance of significant hypoglycemia.  Libre may help users cut down on the frequency and severity of lows, but only if the user scans the sensor every 5-10 minutes, including through the night.  And that’s just not about to happen.

Libre also lacks the ability to transmit data to a cell phone or to “share” the data electronically with loved ones and caregivers.  This will likely change over the next several years, but for the time being, the only person who can see what’s going on is the one who is scanning the sensor.

And how does Libre stack up to our trusty, dusty blood glucose meters?  Sure, Libre has been approved as a replacement for fingersticks, but does that mean it should be?  Remember, on average, Libre is about 10% off from reference (lab) values.  That about matches many older-generation meters that are currently on the market.  Today’s latest meters, such as the Contour Next, Freestyle Lite, Dario and AccuCheck Nano are far more accurate, with results that generally fall within 4-6% of lab values.  The difference can be significant for those who are calculating insulin doses based on blood glucose levels.  The inaccuracy can be even greater when the blood sugar is rising or falling quickly – something called “lag time”.  Because Libre measures glucose concentrations in interstitial fluid in the fat layer rather than in the bloodstream directly, it takes time for changes in blood sugar to show up on the sensor.  Think of it this way:  Fingerstick blood glucose always gets the front seat in a roller coaster, fat-layer glucose always gets the back seat.  When the coaster is climbing, the glucose in the fingerstick will be higher than the fat layer.  When the coaster is dropping, the fingerstick will be lower.

Even if the accuracy of Libre matched the best blood glucose meters, there are still times when fingersticks are going to be needed:

And for many of us who have performed more fingersticks than we’d care to count over the years, there is a trust issue.  The clients we have in Europe who use Libre still check their blood sugar the old fashioned way just to make sure the Libre is working properly.  Some check a few times a day, some a few times a week, and others just during the first couple of weeks.

Bottom line:  If you currently use a CGM and rely on it to warn you when your glucose is getting out of range, Libre is probably not for you.  If you’re not using a CGM and would benefit from being warned when your is getting getting out of range, then you should check into using a CGM other than Libre.  If you like the idea of having frequent BG data along with trending information but don’t want the alarms/alert intrinsic to current CGM systems, Libre may be a good choice.

For those who just rely on fingersticks and are susceptible to hypoglycemia, heck – even if you just detest doing fingersticks, Libre can be highly beneficial.  In addition to being a quick and frequent source of reasonably accurate glucose data, Libre provides that all-important direction you’re headed.  With all the decisions we make throughout the day related to our diabetes, knowing both the current glucuose value and where it’s headed lets us make much better decisions.  Think about it:  If your glucose is 118 and you’re about to exercise, take a test, drive a car, perform open-heart surgery, or just go to sleep, you can make prepare better knowing if you’re rising, falling or stable.

On the plus side, Libre has accuracy comparable to Dexcom, it is very easy to use, and does not require any fingersticks.  It provides a wealth of valuable information to the user with minimal discomfort and inconvience.

On the downside, Libre lacks the alert features incumbent to other CGM systems, and its accuracy, while good, is not as good as most modern fingerstick meters.

A prescription will be required to obtain Libre in the US.  It is approved for age 18 plus, but it can be used by children when prescribed “off-label” by a physician.

To learn more and for product updates, Abbott has set up a website:  www.freestylelibre.us.  If you decide to give Libre a try and want to learn how to react/adjust to the trending information and interpret the downloadable reports, give our office a call (610-642-6055).

To use new technology and really benefit from it… now that’s a SUPER combination!