Pros & Cons of the Tandem t:slim with Control IQ 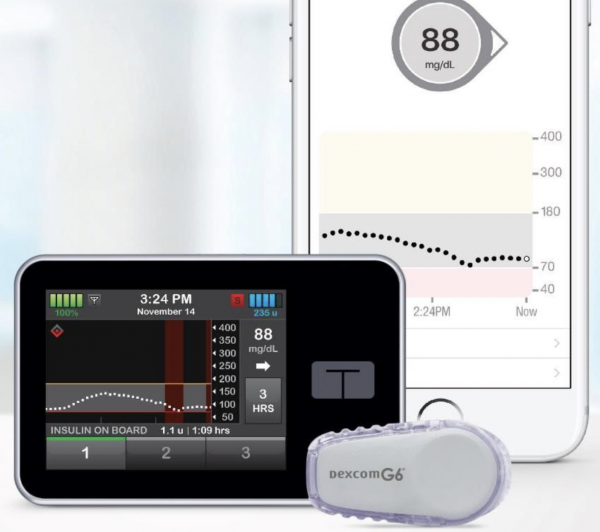 I’m a big fan of the new smart car (also pronounced “Smaht Cah”) technologies.  What’s not to like?  It’s like having another set of eyes watching the road so that you don’t veer into the wrong lane or bump into the car in front of you.  You still have to be an attentive driver, but as long as you can put up with a few extra beeps, the “smaht” features make driving a whole lot safer.

Today, we’re in the midst of a smaht technology revolution in diabetes management.  Better known as “Hybrid Closed Loop Systems,” or HCLs, they combine an insulin pump, a continuous glucose sensor, and a computer algorithm that adjusts certain aspects of the pump’s insulin delivery automatically.  The result is better overall glucose control (particularly more time spent within one’s target range) and less burden on the user to make all the adjustments on their own.

Until recently, we had two HCL options:

Now, we have something new and, some may say, even smahtah:  the Tandem t:slim pump with Control IQ technology.

Taking a look at the Tandem t:slim

Tandem’s HCL system features the sleek Tandem t:slim tubed insulin pump with a full-color touch-screen display.  CGM data reaches the pump via Bluetooth signals from the Dexcom G6 sensor, which lasts up to 10 days and requires no calibrations.  Activating the Control IQ algorithm requires the mere flip of a switch and entry of the user’s weight and average daily insulin requirements.  The algorithm predicts where the glucose will be in 30 minutes (based on CGM values and trends) and adjusts the pump’s usual basal delivery based on the predicted value.  The system can also administer conservative correction boluses on an hourly basis if the glucose is predicted to be quite high or remains high.  It has a preset target of 110 mg/dl. 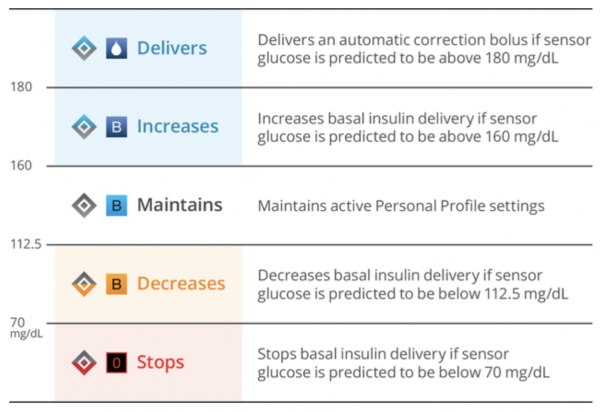 Extended boluses (but not temporary basal rates) remain an option when Control IQ is running.  But the fact is, temp basals are not usually needed since the algorithm makes basal adjustments for the user.  If the user knows that their insulin needs will be significantly higher or lower for a certain period of time, they can easily switch to a different “personal profile,” which includes both basal and bolus settings.  The system has two optional overrides:  An exercise setting (which makes the basal-adjustment algorithm more conservative) and a sleep setting (which makes the basal-adjustment algorithm slightly more aggressive but turns off automated correction boluses).

The algorithm predicts where the glucose will be in 30 minutes (based on CGM values and trends) and adjusts the pump’s usual basal delivery based on the predicted value.  The system can also administer conservative correction boluses on an hourly basis if the glucose is predicted to be quite high or remains high.

In pre-market clinical trials, Control IQ achieved glucose management outcomes similar to those of Medtronic in terms of average (mid-100s) and time-in-range (above 70%) with a low frequency of hypoglycemia.  However, Tandem’s studies had few restrictions in terms of participation.  Our experience (with patients who are well-educated on diabetes self-management) has been that Control IQ produces even better outcomes.  Compared to Medtronic, the amount of work required by the user to maintain the system is much, much less.  Compared to DIY systems, the setup is much, much easier.

The Tandem pump (along with CGM data) has its own download software (t:connect) which displays sensor and pump data on the same reports, but is a bit clunky to navigate.  The reports are clear and simple, but little is offered in the way of computer-generated analysis/insight.  The pump can also be downloaded to “midware” programs such as Glooko and Tidepool.

Overall, Tandem’s system offers a nice value proposition for users.  It is accessible, easy to set up and use, and produces nice results without adding any extra work/burden for the vast majority of users.

For a side-by-side comparison of all available HCL systems (including a cool star-rating for various features), visit the resources section of our website:  https://integrateddiabetes.com/what-is-a-hybrid-closed-loop-system/hybrid-closed-loop-comparisons-options/