How to manage the post glucose levels for our favorite meals

Tips, tricks, and strategies to manage post glucose levels of our favorite meals

This is how we do it….meal coverage for favorite meals that is!

Strategies abound when you look at how people manage glucose levels after a favorite meal or food/dessert. Isn’t it great when you finally figure out the insulin delivery strategy? What you do to contain things – bolus timing, extended bolus – how much/how long and why (what does the meal contain) as well as any need for temp basal/how long, etc can be different person to person.

However, when you consider the content of the macronutrients in the meal, you can start to see that some of the pieces look the same and thus the strategy for keeping that post meal BG from plummeting or sky rocketing might seem similar.

I thought it would be fun to see how each one of us at Integrated Diabetes Services manages the post glucose levels for favorite meals. So, here you have it – strategies for favorite meals from each of us – and remember, we all live with diabetes and use insulin to cover our food too, so WE GET IT!

I have a favorite stew recipe that I make a lot in the Fall and Winter months.

For me, it works to dose 70% up front and extend the extra 30% over 2 hours. I subtract the fiber count from the beans and count that based off my portion size. Without the cheese, I don’t find I need any temporary basal adjustments at all. 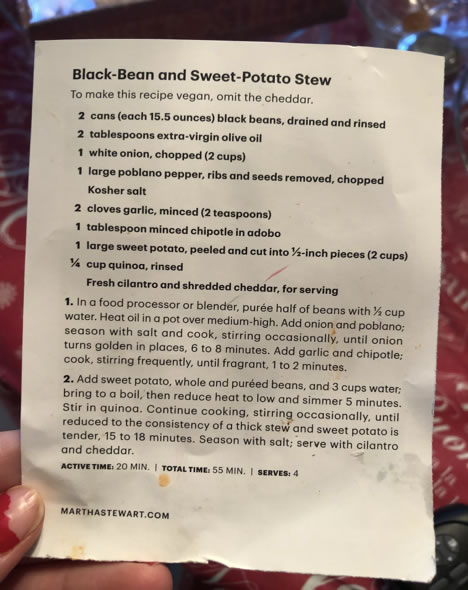 One of my favorite foods to eat is a burrito!!

I give them a tweak by forgoing the rice and going light on the beans (I mean who eats a burrito for the rice?! there is way yummier stuff in there!) My bolus strategy is to do a 60/40 split for three hours and a 50% temp basal increase for 8 hours started at the end of the meal.

If my blood sugar is around target before the meal, I give a 20 minute pre-bolus. This burrito is pretty huge so the entire thing is usually 90-110 carbs….yup, that is without the rice!

When I am using Loop as my pump, I find that a full bolus with a 6 hour absorption time plus an 8 hour 150% override put on AFTER I bolus is really effective.

My foods slow down in digestion at night so if I eat this for dinner, I typically need to shift 10% of my bolus to the back end and add an hour to my extended boluses on a conventional pump. When using Loop, I add an hour to my absorption time.

What is a meal without dessert at times too? Alicia thankfully gave us an idea of something she loves and how it works to cover it for optimal post meal control.

One of my favorite desserts this time of year (Or sometimes a breakfast with a cup of tea) is banana bread. I don’t skimp on the bananas so it’s pretty high GI.

I give this one a solid 35-minute pre-bolus.

I bolus 45g per slice (based on the recipe and how many portions the recipe makes once baked) and add another 15 for my tea with a pump of vanilla syrup and milk (in a typical huge American mug) so, the whole thing is about 60 grams.

In the morning I do a 70/30 extended bolus over 90 minutes since i don’t belt it all down at once and I tend to get a second rise from breakfast. Any other time of the day I don’t need the extension on this one.

It’s funny, I don’t think about the way I bolus being particularly complicated. It has become a bit of second nature now, but when i write it out i realize, wow there really are a lot of variables there.

I LOVE Pupusas, the most common and DELICIOUS food from El Salvador.

They’re essentially a thick corn tortilla with cheese, beans and pork cooked into them, topped with a red tomato sauce and a special pickled cabbage mix called Curtido on top. I was first introduced to them around 10 years ago on my mission, when I met many people from El Salvador. When I went to El Salvador for a service trip a few years later (and where I ultimately met my husband), I really struggled to bolus for them at first. Think of them as the Salvadorian version of pizza, if you know what I mean ?

Occasionally they’ll use rice flour instead of corn flour, but I’ve found that I do much better with the corn flour, and I like the taste better too.

Depending on the size of the pupusa, I generally count each pupusa at 20 carbs (plus or minus), and with traditional pumping give an extended bolus with 50% now and 50% over 4 hours.

Since I use Loop now,  I do the same carb count and select 4 hours as the absorption time. I bolus about 10-15 minutes before the meal, if my kids let me. Just like with pizza, sometimes I’ll realize part way through the meal that the tortilla (or bread in the case of pizza) to cheese/bean ratio is different than i thought so I’ll adjust the carb entry in Loop to better reflect the actual carb count.

My favorite thing to prepare is barbecue — just about every weekend from spring through fall.  I use an old-fashioned charcoal kettle grill with steel grates to get that nice “seared” look & flavor.  I take store-brand bbq sauce and add garlic & onion powder and some black pepper.  My trick is to brush on the sauce during the cooking process on both sides of whatever I’m preparing.  In addition to a variety of traditional meats (burgers, steak, hot dogs, chicken breast), I’ll often cook up swordfish, shrimp on skewers, and occasionally ribs or Italian sausage.  The grill is also great for corn on the cob — I husk the corn, butter & salt it and wrap in aluminum foil — as well as veggies onions and sweet peppers.  Always serve some kind of fresh melon on the side, along with raw spinach and some baby carrots for the kids.

Most of the carbs come from the burger/hot dog buns, corn on the cob and melon.  But what most people forget to account for is the condiments — that stuff can be LOADED with sugar!  Ketchup has about 5g per tbsp, and bbq sauce has a little bit more.  And I must admit, I really baste the bbq sauce on the food while it’s grilling.  So, I usually add about 10g per bbq’d item just to account for the sugar in the sauce.

Then there’s the whole timing thing.  Barbecued food can have a lot of fat in it — particularly the beef and pork products.  That’s going to lead to a secondary glucose rise (in addition to carbs’ effects) several hours after the meal.  So, I usually have to run a temp basal increase on my pump for 6-8 hours at 50% more (150% basal) started at the end of the meal.  The fat, combined with the sheer size of the meal (larger meals take longer to digest than smaller meals) and the fact that I work pretty hard cleaning up right after the meal, means that the carbs are not going to kick in right away… so an extended bolus is necessary.  I’ve learned from experience that giving 20% of the bolus at the mealtime and the other 80% over a 3-hour period works pretty well.

I know, it’s a lot to think about just to enjoy a hearty barbecue meal.  But man, it’s worth it!!!

This time of the year I love, LOVE warm and hearty bowls of soup since the weather outside can be frightful at times! Kathryn was helpful in giving an idea for her strategy for the stew which is about the same as what I find works well for my bean based (no meat or cheese) chili recipes. I usually use a 60% up front and 40% over 1.5 hours. When I switched to using Loop, I found I needed to enter a longer absorption time than I thought I’d need – about 4 hours so that I didn’t get quite so much insulin up front.

Since no one covered a breakfast, and I have a tried and true breakfast I’ve eaten for years…yes, years, I thought I’d share what works for me. This isn’t my only breakfast, but one that I often have, especially in the winter,

Old fashioned thick rolled oats. YUMMY!! A few tricks that work well beyond the bolus strategy are: 1) I do not really cook these, so much as just let them soak like an overnight oat recipe would call for and then I barely get them warm in the microwave with about 15 second warm up.  2) The Old Fashioned THICK rolled part of this keeps the fiber in the picture which slows down the digestive breakdown and helps avoid spikes. 3) I add healthy protein and fat to it which also slows things down and helps to keep me full longer after the meal.

Ingredients are: Old Fashioned thick Rolled Oats, Chia seeds, hemp hearts, flaxmeal and I add cinnamon a pinch of salt to it. I add about 1/3-½ cup hot water to the bowl and then cover it and let it get soft.  I re-warm it in the microwave for 15 seconds just before I eat it and I top it with a ½ tsp coconut oil and 1 tsp. Lakanto Maple syrup (sugar free but not from artificial stuff and tastes soooo yummy!).

My bolus strategy once I have it all set is this: I bolus about 20-30 min before the first bite (depending on BG as well as the trend in my BG at that point). On my conventional pump I gave an extended bolus with 60-70% now and then the other 30-40% over 1.5 hours. With Loop I found I had to give an absorption time of 3 hours as well as give the initial recommended bolus a bit of a decrease. I take the suggested bolus down by 25% and then let Loop adjust as my BG changes over the time post meal.

So many things to consider with diabetes. Variables are many, and if we can figure out some strategies that work for a basic necessity of life such as food, then it takes a bit of the guess work out of blood sugar management.

Do you have a good strategy figured out for your favorites? If not, it is a great place to start. Make a list of your 10 favorite foods or meals. Log them with a starting BG and your bolus strategy (pre-bolus time, use of extended bolus, etc) and then see what happens. If you figure out how to manage around your most common foods and meals this is typically about 75-80% of your intake and thus your post meal control.

As always if you feel you could use some help in the analysis of meals, let us know. Integrated Diabetes Services has a team of clinicians who all live with diabetes and understand. We also know the ins and outs of how to look at data to help you adjust the best. Give us a call and let us help you with your favorite meals!

About the Author: Jennifer Smith

Integrated Diabetes Services, Director of Lifestyle and Nutrition. Jennifer holds a Bachelor’s Degree in Human Nutrition and Biology from the University of Wisconsin. She is a Registered (and Licensed) Dietitian, Certified Diabetes Educator, and Certified Trainer on most makes/models of insulin pumps and continuous glucose monitoring systems.