U2 May be one of the most successful bands of all time, but they haven’t done anything to improve the functionality of insulin pumps… at least not lately (Bono seems to have powers beyond those of mortal rockers). U200, On the other hand, just might.

Lilly recently began marketing their U200 Humalog Kwik-Pen. This pen contains rapid-acting lispro insulin that is twice as potent as ordinary lispro. In other words, every 1cc (cubic centimeter) of U200 has twice the blood-sugar-lowering-power as every 1cc of traditional U100 lispro. 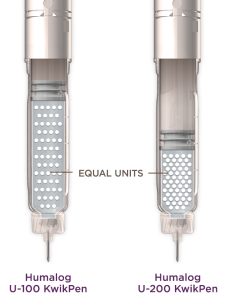 So, what does this have to do with insulin pumps? If you use a large amount of insulin on a daily basis (100 units or more), you might run out of insulin within the first day or two of a fill-up. U200 Might allow you to get twice as much life out of each reservoir since you would only be using half the usual volume for basal and bolus delivery. 180 Units of U200 insulin would last as long as 360 units of traditional U100. 200 Would work like 400. 300 Acts like 600, and so on. Technically, U200 might not give you double the life of U100 since you would need equal amounts to fill the tubing and canula; only the insulin delivered into your body would require half the usual volume. 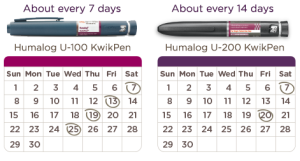 I’m not the type of type-1 to recommend anything without trying it myself first. I drew U200 lispro out of the pens and put it into a tubed pump (Medtronic) and a non-tubed pump (OmniPod). The pumps were left running in our office for three days delivering basal and periodic boluses. No clogs or other problems occurred. So then I wore one for three days, and it worked perfectly fine. The action profile of U200 lispro is similar to that of traditional U100… unlike U500 Regular which is much, much slower to act.

Of course, it is absolutely necessary to change your dosing parameters in your pump before trying this. All basal rates must be cut in half (if you have 0.50/hr then change to 0.25/hr). Correction factors must be doubled (if each unit normally lowers your BG 30mg/dl (1.6mmol), it will now lower it 60mg/dl (3.3mmol)). Insulin-to-carb ratios must be doubled (1:10 must be changed to 1:20, etc.). Since most pumpers will occasionally enter a bolus dose manually, it is also important to remember that the pump is delivering double-concentrated insulin, so half the usual amount should be taken (if you took 4 units for a meal usually, on U200 you’ll only need 2 units). I put a bright sticker on the front of my pump that says “U200” as a not-so-subtle reminder.

Understand that I’m not encouraging everyone to begin using U200 insulin in their pump. However, if you’re frustrated by the need for frequent reservoir/cartridge changes and you and your healthcare provider have discussed it and feel that you might benefit (and you’re careful about changing your delivery settings accordingly), there is no reason not to give U200 Humalog a try.