Dexcom G5: Not just a matter of convenience

by Gary Scheiner MS, CDE
Dexcom’s recent release of their G5 system introduces a number of opportunities and a few challenges for people with diabetes, as well as those who care for and treat them. G5, for those who don’t know, is the same as Dexcom’s previous G4 but without the need for a receiver: The transmitter emits a bluetooth signal that is picked up by a cell phone, and an application installed on the phone displays the data and emits alerts and warnings. To be honest, not all that much has changed. The sensors are the same. The accuracy is the same. The trendgraph displays and alert settings are the same. Calibrations are still required a few times a day, and a “share” option exists for those wanting others to “follow” their data.

Sure, it’s nice not having to schlep around a separate receiver to display the Dexcom CGM info, although G5 does come with a receiver for those who choose to use it in addition to or instead of the cellphone app. Having used G5 for a couple of months now (Dexcom sent me a pre-release version to study), I have found a number of advantages and disadvantages to the new system: 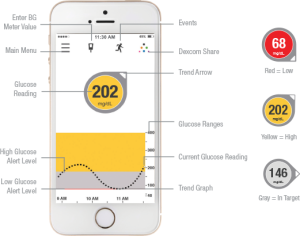 No receiver to misplace or lose. I’m much less likely to lose my cell phone than a CGM receiver. I used to pay my kids $5 to find my lost Dexcom receiver, which happened regularly. Then someone suggested they might be hiding it on purpose just to make 5 bucks.

The trendgraph screens allow you to scroll your finger over the graph and see the individual BG values and event entries.

Instead of the usual boring alert beeps, the system allows you to choose from 22 different types of tones for each type of alert… including the sound of a baby crying, a police siren, or a dance beat. Fun! 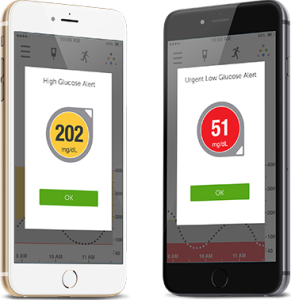 Because numerical values are typed in rather than scrolled in, it takes less time to enter calibrations and events.

Because the display is essentially your cellphone display, the screen can be set to stay on for as long or short a time interval as you prefer. While working out, I tend to keep my screen on constantly so that I don’t have to press any buttons to see my glucose level.

The app has a built-in user guide that includes some nice video tutorials, a setup wizard, and direct links to Dexcom for tech support.

Currently, the program only works with an iPhone. Plans are underway to create an app for Android systems, but it will be several months before this is available. It also does not yet sync with the Apple Watch.

The transmitter is slightly larger (thicker) due to the blue-tooth component.

Personally, I found the bluetooth transmitter range to be about five to ten feet less than that of the radio transmitter.

The new transmitter battery life is about half that of the old transmitter. It really will only last for 3 months. You will get a warning prior to its end of life, and it won’t go more than a few more days beyond this before it is finished. Not like the G4. So, I would say that the lifetime is 3 months and the user will need to re-order on time. Put a note on the calendar, or a reminder in your phone about a week before that 3 month date to ensure you get a new transmitter all ready to go.

Although there is no separate receiver to charge (unless you choose to use it), most cellphones require charging on a daily basis. And if the phone dies, so does the CGM display.

In many social situations, looking at one’s phone is considered rude or a sign of boredom or disrespect. It is necessary to look at one’s phone to see the CGM data, unless one uses an iWatch or resorts to using the receiver that comes with the G5 transmitter.

Extracting data from the G5 cellphone app is still a work in progress. Dexcom’s “Clarity” software, once up and running, will not have the ability to merge sensor and pump (or meter) data into the same reports… at least not easily. 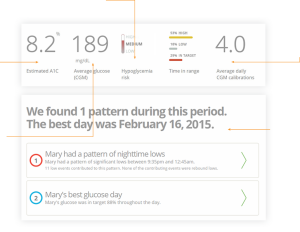 It would be nice if the G5 app could play customized music based on where my blood sugar is (Jackson Brown’s “Running on Empty” when I’m dropping, Billy Joel’s “I Go To Extremes” when I’m very high, etc…). But realistically, even without having to make costly hardware/software alterations, Dexcom could have easily made some nice improvements to the system. Here are a few simple (and low-cost) changes I would have liked to see: