What is a Continuous Glucose Monitor or CGM?

Continuous glucose monitors (CGMs) are electronic devices that measure and display glucose (sugar) levels in the body throughout the day and night. They consist of three parts:

1. A Sensor: This is a small*, thin metallic filament that is inserted just below the skin using a mechanical insertion device. The sensor rests in the fatty layer below the skin, so it is generally not felt by the person wearing it. An adhesive patch or tape covering keeps the sensor securely in place. The sensor contains a chemical that reacts with the glucose in the “interstitial fluid” (fluid between the fat cells below the skin surface), triggering a tiny electric current. 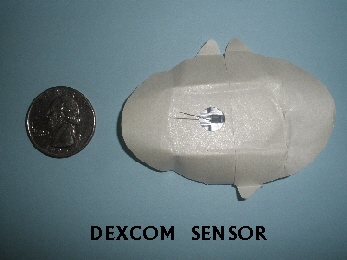 2. A Transmitter: After the sensor is inserted, a radio transmitter is clipped to it. The transmitter receives the tiny electric current from the sensor and sends out a short-range radio signal. The transmitter is small, flat and waterproof. It contains its own battery that is either permanent (lasting for a fixed lifetime), replaced as needed, or recharged periodically. 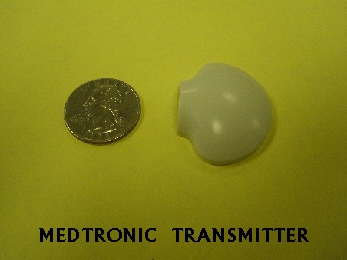 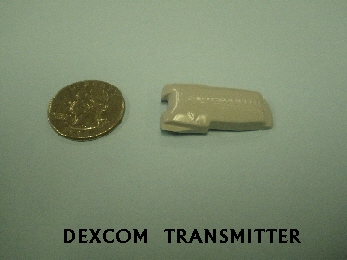 3. A Receiver: The signal from the transmitter is received by a battery-powered handheld device that displays the glucose measurement. In addition, the receiver displays trend graphs, up/down arrows, and various statistics. The receiver can be customized to alert the user of glucose values that exceed certain high or low levels. Certain devices also provide predictive alerts based on the present glucose value and the current rate of change. Some receivers are integrated into insulin pumps, where the pump’s screen serves as the display. However, the pump does not automatically adjust insulin delivery based on the sensor data, although the most recent Medtronic system can suspend basal insulin delivery if the sensor detects a low glucose. All CGM receivers are downloadable for analysis of multiple days, weeks or months of data. 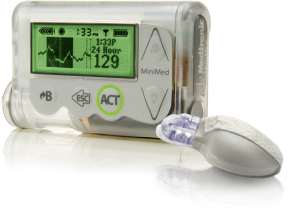 While the transmitter and receiver are “durable” devices, the sensors are considered disposable – with an “approved” life expectancy of 6 or 7 days (depending on the system used). However, many sensor wearers are able to use their sensors for two or more “cycles” before having to replace them. The incidence of skin irritation/infection with sensors is extremely rare. However, extra tape may be required to keep the sensor securely attached to the skin for longer than its approved life expectancy. When re-using sensors, transmitter/receiver batteries must still be changed or charged on a regular basis.

Why Is Continuous Glucose Monitoring Needed?

Fingerstick blood glucose measurements provide a “snapshot” of what is happening at a single moment in time. They offer no insight as to whether the glucose level is rising, falling, or steady. And for most people, fingerstick readings are usually not taken after meals, between meals, and during the night. CGMs are more like movie cameras. They provide immediate information as well as the context in which the information appears.

Research has already shown that consistent use of continuous glucose monitors helps to reduce the severity, frequency and duration of hypoglycemia. It has also shown that for those with elevated A1c levels CGMs help to produce a significant improvement. And that, in turn, reduces the risk of developing long-term diabetic complications. (see references in the “insurance coverage” section)

The high and low glucose alerts can be extremely valuable to those who are trying to avoid potentially dangerous hypoglycemia as well as those looking to reduce their HbA1c level. By setting the low alert at a conservative level (above the usual threshold that triggers hypoglycemic symptoms), the user can be notified of a pending low before it happens, and take corrective action to prevent it from occurring. By responding promptly and appropriately to high alerts, users can reduce the amount of time spent in a hyperglycemic range and minimize the magnitude of the high readings.

As of Janurary 1st, 2014, two companies offer continuous glucose monitoring systems in the United States: Dexcom and Medtronic. Medtronic offers a CGM system that integrates with their 530G insulin pump, as well as a health professional model (iPro). The iPro system does not display information while it is worn, but stores three days of data for analysis by your healthcare professional.

If you are hesitant to commit to a continuous glucose monitor system, it is available on a trial basis from us, even if you live outside the Philadelphia area. Check out our Optimizing CGMS page for even more information.