Can You Feel The Vibe?

Yes I Can! Particularly when my sensor glucose is above or below target. That’s when my Animas Vibe insulin pump, recently approved for sale in the U.S., vibrates to let me know something is amiss. Vibe is the first and only insulin pump to integrate all the features of the Dexcom G4 display module into the pump itself. That’s right! No need to tote around a separate CGM display.

Vibe has been pending market approval in the U.S. for what… 2? 3? 4 years? There are some who claim to have unearthed the original FDA application written in code on the back of the original Declaration of Independence. What took so long for the FDA to approve Vibe? Lord knows. But I do know that the device has been used in Europe for several years now, and I’m yet to read about anyone blowing themselves to smithereens using it. But let’s let bygones be bygones, and get to the important question: WAS IT WORTH THE WAIT?

I was given a 2-week trial/demo of the Vibe by Animas in mid-December, and promptly wore it on a one-week family cruise vacation and through the holidays. I must say, having the Dexcom CGM data right on the pump gave me a nice sense of autonomy. Never mind that I couldn’t count carbs worth a damn on the cruise (six meals a day was about average)… having my glucose data right there meant that I only needed to have one diabetes thing at my disposal at all times. Nothing else to carry around. Talk about emancipation! I kept my glucose meter at my bedside and calibrated morning and evening. As long as the sensor was reasonably close, I trusted it for dosing purposes throughout the day. And it was almost always close.

So for two weeks, I didn’t have to deal with forgetting or misplacing my Dexcom receiver. No need to charge anything, and no worries about getting the receiver wet, since the Vibe pump is fully watertight. And downloading all of the data at one time to the Diasend program was faster and easier than having to download the pump and CGM separately. 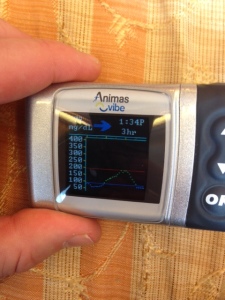 Not that everything about the new system is better. Compared to the Dexcom G4 receiver, the screen on the Vibe is considerably smaller (about 33% by my estimate). In particular, the glucose value is a much, much smaller type size. Whereas the Dexcom has distinctive beeps and vibrations for each type of high/low alert, Vibe’s alerts are the same for each one. (I like having the distinct alerts, because if I’m very busy when it goes off, I’m more likely to attend to a low than a high)

All aspects of programming the CGM – calibrating, setup, scrolling between screens, etc. – require more button pushes and take longer with the Vibe than with the Dexcom receiver. The buttons are slower to respond and the scrolling feature is particularly frustrating to use. It reminds me of playing miniature golf on a green where the hole is at the top of an anthill – overshoot, undershoot, overshoot, undershoot, etc…

Two other downsides to the Vibe’s CGM compared to the Dexcom G4. The transmitter that comes with the Vibe system is the older/higher-profile version, which protrudes off the skin slightly more than Dexcom’s new low-profile transmitter. The good news is that those who currently have a low-profile transmitter can use it with the Vibe. The other issue has to do with system accuracy. Vibe’s built-in software utilizes a previous-generation algorithm for translating the sensor signal. The latest Dexcom G4 receiver (and anyone who has updated their older G4 with the new “505” software) has the most current algorithm which produces a MARD (mean absolute relative difference) compared to lab values of just 9%.

So there you have it. Do I wish Vibe’s user interface, programmability and algorithm were better? You bet I do. But these are all “small potatoes” compared to the value of an integrated pump and highly-functional/user-friendly CGM. And I’m sure Animas has these things in mind as it plans its next generation system… one that proactively prevents hypoglycemia based on CGM data. 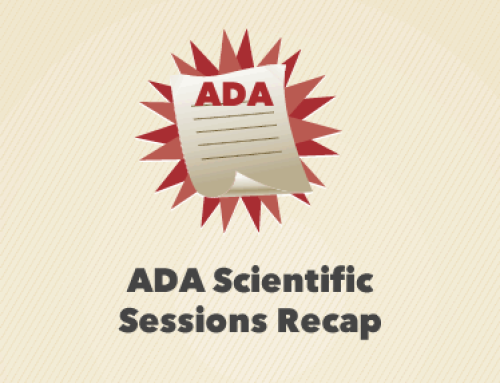 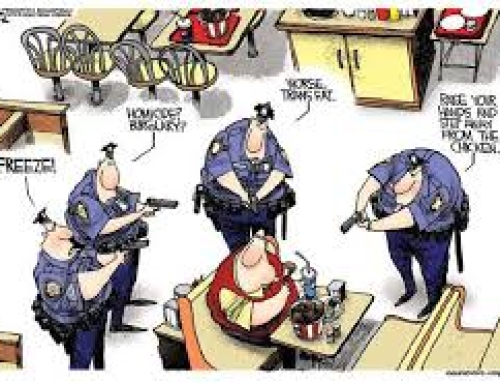 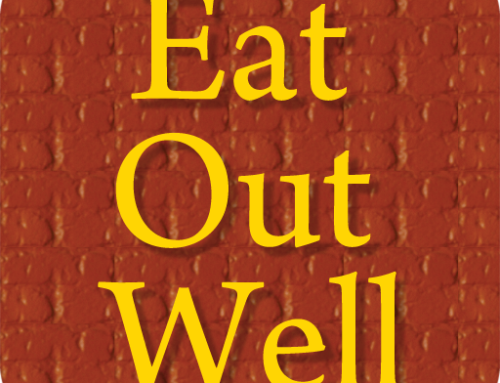