Back In A Flash?

Abbott’s new Libre Flash glucose monitoring system has been approved in Europe and will soon be available in France, Germany, Italy, Netherlands, Spain, Sweden and the UK. Libre is a sort of hybrid between a fingerstick glucose meter and a CGM in that it provides individual glucose values (with trending information) based on a signal sent from a subcutaneous sensor. However, the user must position a receiver within a couple of inches of the sensor to receive data, so it doesn’t pick up a continuous signal or alert the user when the BG is heading high or low.

Libre’s sensor is very small (5mm flexible metallic filament) and is inserted on the back of the arm with a device that requires a single button push. The user never sees the introducer needle. The transmitter, which comes attached to the sensor, is about the size of a quarter. No fingerstick calibration is required, but there is a 1-hour warmup period after insertion before data is generated. Each sensor is designed to last up to 14 days.

The handheld receiver has a full-color touch screen. It displays the current glucose, an 8-hour trend graph, and direction arrows. The user may enter notes into the receiver to keep track of things like carb intake, insulin doses and exercise. The receiver generates on-screen statistical reports and graphs for up to 90 days. One of the reports, called an “ambulatory glucose profile,” is similar to a 24-hour modal day report with a median line, 25/75% ranges, and 10/90% ranges in different colors. Other reports indicate the percent of time spent above/below/within target range, the number of hypo episodes that have taken place, and average glucose by time of day. The receiver can be programmed to beep or vibrate to communicate with the user.

Word from Abbott is that the device will be marketed as a replacement for fingerstick glucose meters rather than as a continuous glucose monitor, although it clearly has features of each. A spokesperson from Abbott stated that the company has had discussions with the US FDA, but there is no timeline for its approval or release in the United States.

One must proceed with caution when considering any new device from Abbott. The company’s Navigator CGM system was well-received by the diabetes community, but Abbott failed to adequately support the product and eventually pulled it from several markets, including the US. To their credit, they went out of their way to help clients using Navigator transition to other CGM devices.

For a series of informative videos on the new Libre system, cut and paste this URL: 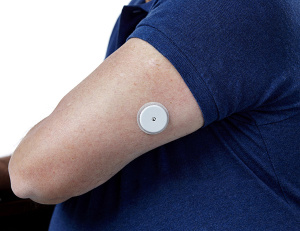 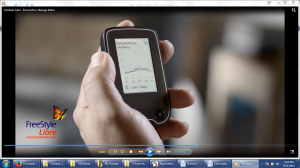