Ahhh… Paris, France. World-famous for things like romance. World-class art. The Eiffel Tower. And of course, the 8th International Conference on Advanced Technologies & Treatments for Diabetes, held in Paris in late February 2015.

Although I could not be there in person (darn!), my colleagues who did attend were kind enough to share their discoveries along with summary reports from 385 Oral and Poster presentations. Being the nice guy I am, I painstakingly sifted through all 385 reports to bring you a “Gary’s Digest” of the best of the best.

Of course, there was a multitude of reports on various closed-loop technologies, demonstrating varying degrees of success. Overall, systems that performed best, utilized multi-hormone delivery (insulin and glucagon), alternative routes for insulin delivery (to reduce time to onset and peak action), later-model glucose sensors (particularly the Dexcom G4 with new 505 algorithm), and some degree of user involvement (such as telling the system when food is about to be consumed).

Here’s a synopsis of the best of the rest.

A Novo-Nordisk-led study showed that insulin aspart (Novolog/Novorapid) starts working faster when formulated with nicotinamide and arginine. First appearance of the faster aspart was 6.6 minutes earlier than with traditional aspart, and earlier and higher glucose-lowering effect in the first 1.5 hours post-dose. BG values were lower 1 and 2 hours after after meals with faster aspart, indicating improvements in postprandial control.

A group of Italian clinicians studied the effectiveness of insulin pump therapy in children and adolescents who initiated insulin pump therapy within two years after diagnosis. Chart reviews of 684 patients suggests that early pump commencement (< 6 months from the onset of diabetes) provides lower and long-lasting reductions in HbA1c values than a late commencement. They theorized that this may be due to prolongation of the honeymoon phase caused by aggressive glucose control soon after diagnosis.

A multi-disciplinary team in Spain analyzed the effects of patient self-adjustment of basal insulin when using insulin pumps. They found that patients who modified their own basal settings based on their glucose data experienced significantly less glucose variability and a lower A1c. Frequency of hypoglycemic events was also reduced modestly.

In research sponsored by pump infusion-device manufacturer Convactec, the effects of wearing infusion sets for longer than the recommended 2-3 day time interval were evaluated. 24 Pump users were followed for three months, using Mio or Inset (90-degree) infusion sets for either 2 or 4 days. The number of catheter-related adverse events was 290 with 2-day use vs. 495 with 4-day use. Overall treatment satisfaction was higher with 2-day use than with 4-day use.

A review of downloaded data from pump users in Argentina produced several key findings. First, those with basal rates that exceeded 50% of total daily insulin were likely to be in poor control. Those who consumed mostly low-glycemic-index foods were at greater risk of hypoglycemia. The researchers concluded that proper basal settings and use of temporary basal rates and extended boluses are important to achieving optimal glycemic control.
GLUCAGON GOLD

Locemia Solutions of Montreal, Canada reported on the efficacy of a new intranasal glucagon spray for treatment of hypoglycemia. A dry-powder formulation of glucagon administered intranasally (IN) was compared with traditional intramuscular injection of glucagon. A randomized cross-over trial was conducted at 8 T1D Exchange clinics. Insulin was administered intravenously to induce hypoglycemia. Five minutes after stopping insulin, glucagon was administered into muscle at one visit and nasally at another visit. Successful 30-minute recovery was achieved in 97% or participants (one participant took 40 minutes to recover). Mean time to bring glucose to ?70 mg/dl was 14 minutes for traditional injection and 17 minutes for the nasal spray. 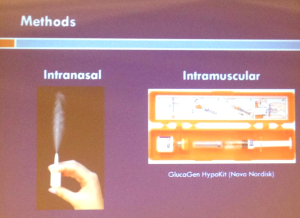 Patients at Oregon Health & Science University tested Xeris’ new glucagon formulation which is stable at room temperature and administered via an insulin pump. This Phase 2 randomized study tested 0.3, 1.2 and 2.0 lg/kg doses of Xeris’ glucagon formulation and traditional glucagon (Glucagen, Novo Nordisk), administered via Insulet OmniPod. The Xeris glucagon effectively increased blood glucose levels in a dose-dependent fashion similar to traditional glucagon at all doses administered, but with a greater peak action and with no difference in side-effects. The data support further testing of Xerix’ glucagon for management of blood glucose as a component of a closed-loop system.
MEDICATION SENSATION

Researchers at Yale Medical Center’s Department of Pediatrics examined the postprandial effects of daily liraglutide (a GLP-1 agonist) injections in patients with type-1 diabetes. Over a three-week period, patients taking liraglutide lost an average of five pounds, required 25% less insulin, and saw significant decreases in post-meal glucose peaks. These preliminary data supported their hypothesis that liraglutide will be an effective adjunct to both current (open-loop) and prospective (closed-loop) treatment of T1D.
FOOD FOR THOUGHT

Scientists in Sydney, Australia and at Joslin Diabetes Center in Boston examined the effects of adding varying amounts of fat to meals with identical carbohydrate content. Test subjects were given low-fat (50 g carbohydrate, 9g fat) and high-fat (50g carb, 36g fat) meals with normal, split/dual, and extended/square bolus types. The “usual and customary” dose given to cover the carbohydrate content of the meals brought BG to normal when low-fat meals were consumed, but not with high-fat meals, regardless of the type of bolus utilized. On average, 75% more insulin was required to cover high-fat meals.
CGM UPDATES

Dexcom researchers discussed the significance of lag time in the usefulness of CGM data. Dexcom G4 Platinum’s new (505) software was evaluated in 50 diabetes patients to determine lag time. The median time lag of the system, compared to lab glucose values, was 6 minutes. The majority (88%) of participants had a time lag within 10 minutes.

Researchers in California evaluated the accuracy of Medtronic’s 3rd-generation Enlite Continuous Glucose Sensor (Enlite3) in a controlled inpatient setting and in a real-world camp setting. In the inpatient setting, Enlite3 values demonstrated a mean absolute relative difference (MARD) of approximately 10.5% compared to YSI lab values. In the camp setting, the overall MARD was approximately 11.8% compared to fingerstick values. Investigators reported good sensor performance across a wide range of glucose values.

In the T1D Exchange clinic registry, hypoglycemia-induced seizure or loss of consciousness within the prior year was reported by 21% of participants over age 65 with long-duration type-1 diabetes. Researchers from multiple centers designed a case-control study to identify factors associated with severe hypoglycemia in older adults. Those with and without a recent bout of severe hypoglycemia were nearly identical in terms of age, TID duration, pump use, HbA1c and mean CGM glucose. Those who experienced severe lows showed more glucose variability on their CGM and hypoglycemia unawareness was significantly more common. They also had slightly lower cognitive test scores than controls and higher Hypoglycemia Fear Survey scores.

Use of Diabetes Alert Dogs (DADs) to monitor BG extremes in type 1 diabetes is growing, but there is little data on their accuracy. This study investigated DAD accuracy using owner diaries of daily BG levels and DAD alerts. 18 DAD owners, all of whom obtained a DAD from the same training organization in Virginia, participated in the study. Individual DADs varied greatly in accuracy. Overall, low BG (<90 mg/dl) was caught by DADs 66% of the time and high BG (>200 mg/dl) was caught 52% of the time. Half of DADs caught highs and lows more than 65% of the time.

The financial impact of hypoglycemia in patients with type-2 diabetes was evaluated by a team at Medtronic. Patients taking either insulin or oral hypoglycemic agents who were enrolled in a commercial health plan incurred significant costs for treatment of hypoglycemia. Inpatient treatment cost an average of $22,000 per occurrence, while outpatient or emergency room treatment cost an average of $450 per occurrence. The researchers estimated that the single payor incurred costs of approximately $150 million over a five year period for the treatment of hypoglycemia among its members with type-2 diabetes.
PREGNANCY SUCCESS

The Ministry of Health in Russia studied the condition of full-term infants born to moms with type-1 diabetes who used insulin pumps versus multiple daily injections. Children born to moms using pumps were approximately 400 grams (1 pound) lighter, scored significantly higher on APGAR testing, and were significantly less likely to require resuscitation or experience hypoglycemia at birth. The incidence of severe preeclampsia was 10% vs 49%; incidence of preterm delivery was 24% vs 38%.

To answer the age-old question, “Is it better to reduce basal or bolus insulin for preventing hypoglycemia during exercise,” researchers in France had 20 type-1 subjects exercise 90 minutes after lunch on two occasions. On one occasion, the lunch bolus was reduced by 50%. On the other occasion, the basal rate was reduced by 80% for 3 hours starting an hour prior to the exercise. Hypoglycemic events tended to be less common when the bolus was reduced. With bolus reduction, blood glucose levels were higher immediately before exercise but comparable afterwards. Time within target range

[70-180 mg/dL] in the afternoon was comparable for both groups, but with less time below 80 mg/dL and more time above 180 for the bolus reduction group.

Investigators in Switzerland evaluated the accuracy of CGM during exercise compared
to a resting phase. Seven athletes with type-1 diabetes underwent a 90 minute resting phase followed by a 90 min moderate intensity cycling session while monitored by the Dexcom G4
Platinum. MARD (compared to YSI lab values) during exercise was 14.79% compared to 14.95% during rest. 100% Of CGM values obtained during exercise were within zones A and B of the Clark Error Grid (indicating relative safety with using the readings for decision-making purposes), compared with 97.5% of values obtained during rest.
CARE AT A DISTANCE

A research team in Belarus examined the effects of glucose control on sleep patterns. They found that average glucose levels of 180 mg/dl correlates with latency of REM sleep and more abrupt changes in sleep phases compared to those with averages near 140 mg/dl. Those with lower averages and less hypoglycemia also experienced longer REM sleep phases and more efficient sleep cycles.