In the world of diabetes management, artificial pancreas systems rely on automation and your brain.

When most of us think of a “hybrid,” we think of a car that runs on a combination of gasoline and electricity. But when we are talking about diabetes management, hybrids describe “closed loop” or artificial pancreas systems that run on a combination of an automated computer program (called an “algorithm”) and human decision-making (brain power). 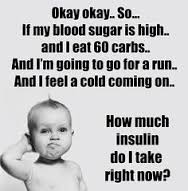 The brain power part we’re all familiar with.  This consists of conscious decision-making related to insulin dosing, based on things like carb intake, physical activity and blood glucose levels.  Of course, this is not a simple process.  It is highly experience-dependent, involving a combination of art and scientific know-how.  It also takes a fair amount of mental energy.  One group of brave type-1 souls actually counted the number of times they had to make a decision or take an action related to their diabetes throughout the day.  They averaged about 120 diabetes thought-points per day!  It’s sort of like running a very large and complex program in the background on your computer all the time… it takes up a lot of memory and burns a lot of energy.

And perhaps worst of all, even when everything is done the “right way,” the brain power approach does not always produce desired results.  There exist an almost unlimited number of variables that influence blood glucose levels.  It is virtually impossible to account for them all.  That’s why we have to lower our expectations somewhat.  For most of our clients, keeping glucose levels somewhere remotely close to normal at least 75% of the time is considered all-star- caliber management.

That’s where the automation part comes in.  By automating certain aspects of glucose control, not only does our brain get a much-needed rest, but we can actually see better results.  With a closed loop system, a continuous glucose sensor feeds data to a computer program (called an “algorithm”) which then tells an insulin pump when and how much insulin to deliver.  For example, let’s say one evening you consumed an entire Bloomin’ Onion at Outback Steakhouse.  The fat content would undoubtedly cause your blood sugar to rise steadily throughout the night.  As this occurs, the sensor would inform the algorithm about the rise, and the algorithm would instruct the pump to deliver larger amounts of basal insulin until the blood sugar start to come down and approach target levels.

The Hybrid Closed Loop Artificial Pancreas is Coming Soon (but not soon enough)!

Unfortunately, with the tools and technology we have available, no closed-loop system can control glucose levels perfectly.  They all require a certain degree of user intervention (i.e. brain-power) to make them function better.  Food, for example, seems to create a challenge for hybrid closed-loop systems.  By the time a glucose sensor detects a blood sugar rise from food and triggers increased delivery of insulin, it is too late to avoid a major post-meal glucose spike.  Exercise can also be difficult to manage.  If blood sugars drop during exercise, the pump may reduce or halt insulin delivery to prevent a further decline.  However, any insulin that was delivered during the previous three to four hours is still working, so hypoglycemia can still occur.  Thus the need for the user of a hybrid closed-loop to remain involved in much of the decision-making.

There are a multitude of different groups working on hybrid closed loop projects, and each one runs on its own unique proportion of automation and brain-power.

Here are a few of the projects that were presented and discussed at the ADA Scientific Sessions in New Orleans this past June with a breakdown of percentage of automation / brain power: